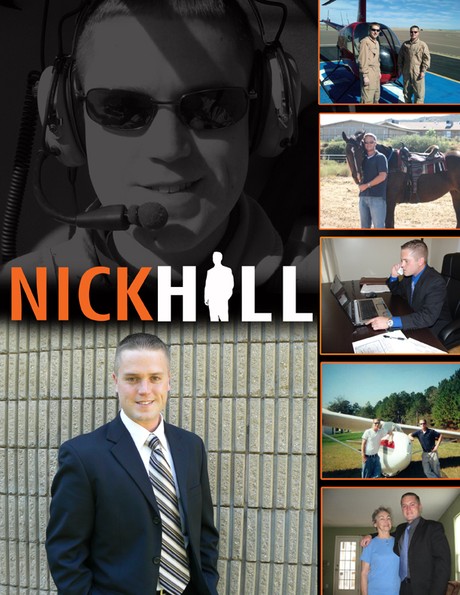 Nick has been a resident of Greenville, SC since August, 1997. He has always had a strong desire to see new places and try new things. His adventurous spirit and ability to quickly adapt to new situations lead him to spend much of his time outdoors where he enjoyed camping, backpacking, mountain biking, caving, rock climbing, and various other activities. Nick also loves to fly anything with wings or a propeller and hopes to obtain his pilot’s license in the near future. As a member of the Boy Scouts of America, Nick began developing his leadership, communication, coaching, and problem solving skills at an early age. Having attained the rank of Eagle Scout and later becoming an instructor, Nick learned the importance and value of keeping focused and moving forward. He also realized the personal enjoyment and fulfillment he received by helping others reach their goals.

Nick began working at a mega-plex movie theater in 1997 and was quickly offered a position with the management team. He attended Clemson University where he focused on business and financial management courses as well as being an active member of the drum line for “The Band that Shakes the Southland!” Nick continued his management role with the movie theater and after he was selected to attend the corporate certifier program he became actively engaged in the training and certification of new and existing managers.

Nick’s desire to help others and his eagerness to meet new people quickly lead Nick to realize his passion for real estate. He obtained his real estate license in 2005, and became a member of the National Association of Realtors. Nick spent time working with home remodeling/repair companies to enhance his knowledge of the industry. He has developed a broad range of relationships in the Greenville market which have increased his ability to quickly negotiate transactions and expedite closings. Nick’s attention to detail along with 13 years of conflict resolution experience has helped Nick excel in the real estate industry.

Having worked with two excellent real estate companies in the Greenville area, Nick decided to further his career and obtained a South Carolina Real Estate Broker license. In February 2010 he began working with New City Real Estate. While he still loves working with buyers and sellers Nick is directly involved in the overall management, operations, and development of agents.

Nick’s primary goal is that of his client as well as every client and agent of New City Real Estate. He is determined to redefine the consumer perception and business practices of the real estate industry by providing a level of quality professional care, far superior to the standard, which will be respected and admired by consumers and agents alike.

Nick’s mission, and the mission of New City, is to always be Building lasting Relationships that you can rely on, continue Driving Progress by helping you achieve your goals, and to keep Improving Lives by taking care of his family, friends, clients, customers, agents, and communities.

The quality of life in the upstate as well as the proximity of the beautiful mountains, lakes, rivers, beaches, and cities is unmatched. Nick is proud to call Greenville, SC “Home!”